This article covers Summarisation and Filtering of OSPF Routes on Cisco IOS Devices:

Summarising routes in OSPF allows routers to reduce the size of their routing table. A summary route can be used where a router has the same egress path to similar contiguous networks that subsequently can be expressed as one route. This also allows the OSPF link state database size to be reduced in size where summarisation is possible.

OSPF Route Filtering involves filtering / modifying the information used to generate OSPF LSAs. LSAs (Link State Advertisements) are the building blocks of OSPF routing information, LSAs themselves can not be filtered directly, however the process in which Routing Information is used to generate LSAs can be.

In a multi-area OSPF design, you may wish hide parts of the overall topology from specific areas. You may also wish to hide certain prefixes within in an area from entering the routing table of a particular router. Another potential use case would be to filter out specific prefixes that have been learned externally.

One or multiple OSPF LSAs are propagated depending on their scope via LSU (Link State Update) packets, for the sake of completeness I have included the main LSA types below, these are NOT all the OSPF LSA Types. For more in-depth specifics relating to the below and other LSA types, another article would be required: 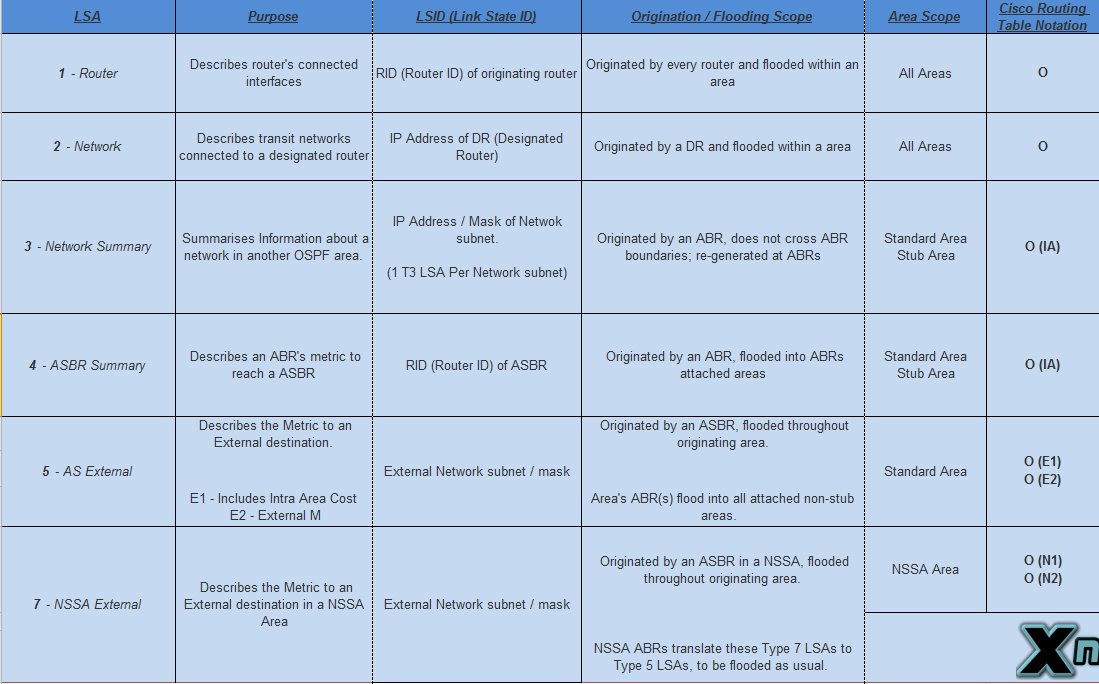 Refer to the above topology for the later Filtering examples performed at both an ABR (Area Border Router) and a ASBR (Autonomous System Border Router).

A point to note here is that those external routes will only exist in Area 12 as Type 7 (NSSA External) LSAs, these will be translated into standard Type 5 (External) LSAs by R4. Type 5 LSAs are eligible for flooding out all of R4’s interfaces that aren’t Virtual Links or attached to a stub area.

As a starting point for this article, I have included the routing tables of both ABRs (R1 & R4) and the ASBR (R5) above.

Summarisation of routes in OSPF can only be performed at an ABR or ASBR, this is as summarisation needs to be done at the boundary of areas to which ABRs / ASBRs connect to.

Use the  #area area-id range ip-address mask [advertise | not-advertise] [cost cost] command to summarise at an ABR. This will generate a summary route to ‘null0’ on the router generating the summary. Null0 is used so that if this router receives a packet for a IP within that summary but doesn’t have a specific route for it, it then doesn’t route it via its default route. Simply, the router itself is relying on its more specific interfaces / ranges.

It’s worth noting that only Intra-Area routes can be summarised, not Inter-Area routes.

Intra-Area routes are evaluated and if at least one more specific route in the configured summary range exists, then the ABR will advertise a summary route, otherwise not. The ABR which would usually originate multiple Type 3 (Summary) LSAs now only originates a single LSA for the summary route so it can be propagated into other attached areas.

The cost / metric of this summary is taken as the lowest metric of the most specific component route, alternatively it can be specified in the above command. The ‘not-advertise’ switch on the ‘area range’ command can be used to filter out Intra-Area routes, this will be discussed later.

As you can see above the wider network no longer sees the specific routes but the summary routes instead.

How about applying this concept to the EIGRP routes learnt from R6 by R5 as OSPF Type 7 LSAs (NSSA External) and advertised through R4 and the rest of the OSPF domain as Type 5 LSAs (AS External)?

External routes summarised at an ASBR can not have their cost manually specified, instead the summary route will take the metric / cost of a more specific route with the lowest cost.

Verify a summary is being injected into OSPF at R5, we can also verify the LSA being generated – note R5 is a NSSA ASBR:

To understand how to influence the generation of Type 3 (summary) LSAs, a high level diagram of the process of OSPF adjacency formation and LSA generation is shown above.

The OSPF process on a ABR (Area Border Router) examines the Routing Table (RIB) and generates / floods T3 LSAs from these intra-area routes. An ABR also examines T3 LSAs it receives that’s originated by other ABRs, these are considered inter-area routes and will only be accepted from Area 0 (backbone area) – this is a loop prevention mechanism. Once an ABR has received inter-area routes in the form of T3 LSAs, it will then flood them to its attached non backbone area(s) to propagate this information.

In terms of filtering external routes, this is mainly down by filtering out routes from one routing process to another during redistribution. There will be some examples of this a little later on.

Depending on the method used to filter OSPF routes, the actual method may either suppress the information used to generate a T3 LSA or it may just prevent that information from entering a process or routing table. This will be explained in slightly more detail alongside each filtering method.

Filtering at an ABR

This command is to be applied on our ABR – R1 in our case, note the option to specify a direction in the above command. In this case filtering prefixes into a non backbone area attached to the ABR (such as 33 or 51) will result in prefixes being filtered out in only that area.

To filter prefixes from one area to other backbone attached areas, prefixes inbound to area 0 need to be filtered out, preventing them from being propagated to other attached areas.

area range (not-advertise) – Since OSPF summarisation occurs before LSA generation, we can use this method to summarise routes but prevent respective LSAs from being generated. This is similar to applying the ‘filter-list’ command in the outbound direction, this will mean that routes from an area are suppressed when summarised and subsequently prevented from being propagated to other areas.

Following on from our previous example, we will look to prevent the 10.200.100.0/23 summary from being propagated out of Area 51 (notice that we are already summarising at R1 for this range – as per earlier example) : 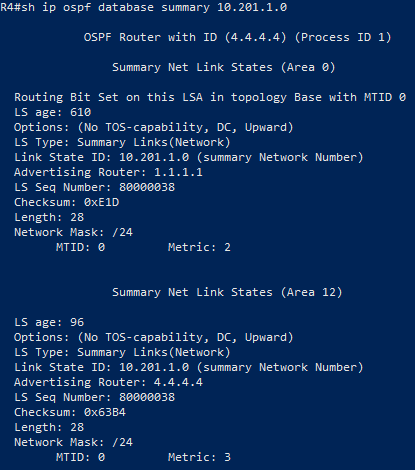 In our example below (after removing both ‘area range’ and ‘filter list’ commands on R1), we will look to prevent R5 learning about the ‘10.201.1.0/24’ route. We will achieve this by applying a distribute list inbound on R4 to prevent it from learning about this prefix and subsequently generating a Summary LSA for it: 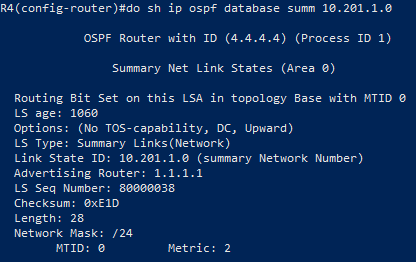 Specifically, we will be looking at filtering out the 203.0.113.0/24 route using one of the below methods. To recap, these external routes are redistributed from EIGRP into OSPF at R5 in a NSSA area. These external routes exist as type 7 LSAs in Area 12, until they are converted to Type 5 LSAs at R4 and propagated throughout the rest of the OSPF domain.

R5 will be the best place to filter out these external routes as it’s as close to the source of origination as possible. We could filter on R4 if we wanted just area 12 to know about this route.  You can see the Type 7 LSA for 203.0.113.0/24 below: 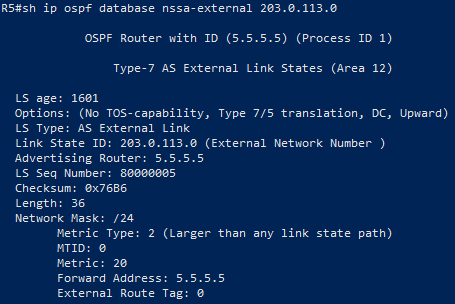 area range (not-advertise) – Similar to when we summarised a set of external OSPF routes, we can use the same  #summary-address {{ip-address mask} | {prefix mask}} [not-advertise] command to create a summary (of the same route) and not advertise it.

As above R2 or R3 no longer see this external route and R5 is no longer generating a type 7 LSA for it.

route map (redistribution) – After removing our ‘area range’ command above, we can achieve the same by using a route-map during redistribution on R5 as below: