Since I built my physical lab (initially for my CCNA) 2-3 years ago, I have struggled to keep the hardware and software up to date due to many factors such as cost, noise, physical space and power consumption. Another attractive aspect is the variety of networking appliances that can be deployed and ran on demand.

As a result of this I recently (last year) moved my focus to running virtual appliances where possible (mainly using trials) on my VMWare ESXi 5.5 Host. My Host consists of 64GB of RAM . 2 x Dual Port NICs and adequate Dual Xeon processors to allow me to run a variety of topologies integrated with physical hardware for features that are not easily virtualised.

What is a vSwitch?

A vSwitch in ESXi is a virtual switch which connects virtual machines on a virtual network to a physical network, this is done through uplink adapters called vmNICs. vSwitches ignore Spanning Tree BPDUs on the uplink as the ESXi hypervisor uses a split-horizon mechanism between uplinks; this is where frames received on one uplink can’t be sent to another uplink resulting in a ‘loop.’

A vSwitch connects in a conventional manner by trunking over multiple VLANs from a physical switch, a port group can then be created for one of three example scenarios, the vNICs on the VMs then assigned to the port group as below :

The current relevant part of the setup is a 2Gb (2x1Gb) Cisco Etherchannel link from my ‘core switch’ to my ESXI Host vSwitch; LACP is not supported by vSwitches. This switch contains the VLANs that are routed by both the VM Appliances and also physical devices.

The relevant ports on the cisco switch as configured as below:

Create your Port Groups here, default one is set for untagged traffic, repeat this step add further port groups, this is how it should look on the last of three.

The image below is for reference, I have used a spare NIC. 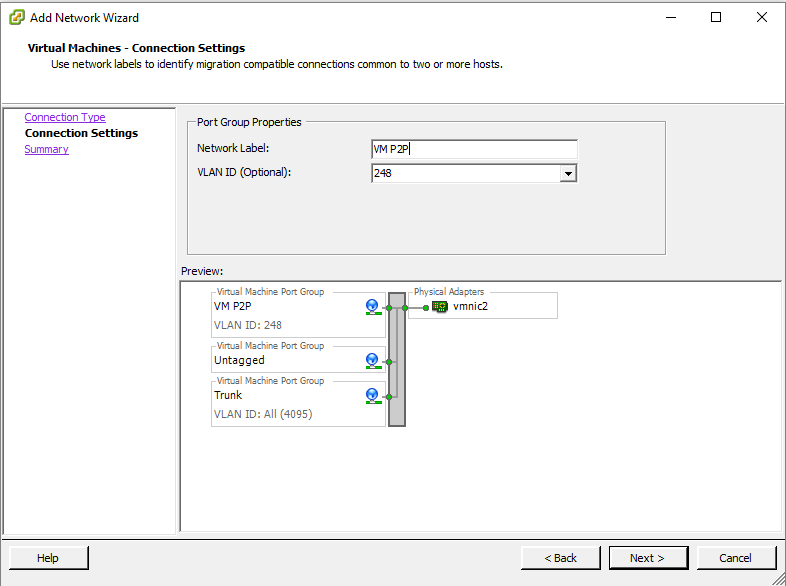 You can now add your vNICs to the relevant port groups and configure the interfaces in the VM itself. Here’s a partial diagram of my vSRX appliances which connect to my Cisco CSR Appliances: 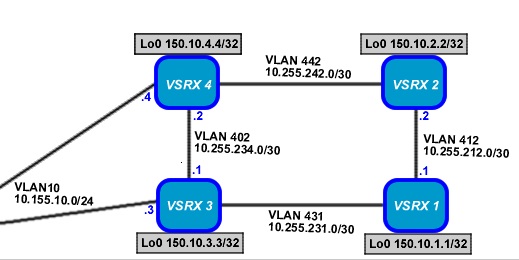 Each node above represents a VM and each link represents a common VLAN. Since the vSRX doesn’t support VLAN tagging, an individual port group exists for each VLAN, the respective interfaces of each node are added to the appropriate port group and configured.